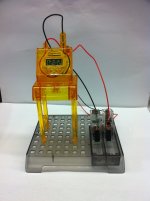 A demonstration of two sugar biobatteries connected in a series to power a digital clock.

Nearly all living cells break down sugar to produce energy. By mimicking what plants and animals do naturally, researchers at Virginia Tech say they have developed a battery that can store the most energy for its weight using sugar as a fuel source.

The battery technology could serve as the next generation of green power sources, researchers reported in a study published Jan. 21 in the journal Nature Communications.

Most gadgets today run on lithium-ion batteries, which are costly. Lithium is a limited resource with the majority of the world's supply found in Bolivia, China, Chile, Argentina, and Australia.

Sugars, on the other hand, are abundant in supply and safe to use.

In the study, researchers found that the best fuel was a sugar solution made of 15% malodextrin, which is a product of corn starch.

In a fuel cell, the malodextrin mixture was combined with air to generate electricity with water as the main by-product.

In animals, proteins called enzymes inside cells are used to "burn" sugars, converting them into carbon dioxide, water, and stored energy. The reactions are carried out in a sequence known as a biological pathway, where a substrate (sugar in this case) is converted into a product by the first enzyme. The product of the first reaction is then handed off to another enzyme as the starting compound for the next reaction — and so on until the final products are created.

Here, researchers created a completely new enzyme pathway that is not found in nature. "We put a lot of enzymes from different sources into one pot," Y.H. Percival Zhang, the lead author of the paper and a professor at Virginia Tech told Business Insider via email. 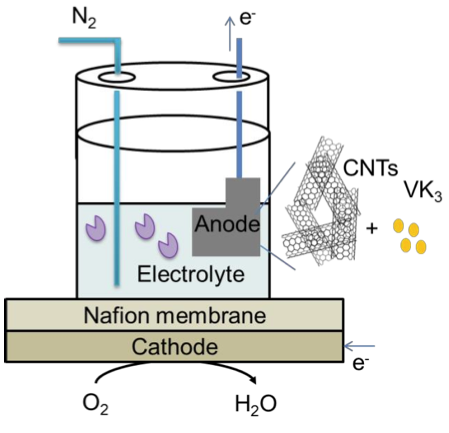 A diagram of the enzymatic fuel cell. The purple blobs are the enzymes. The electrons flow in through the cathode and out through the anode

Researchers have used sugar to power batteries before, but they were not able to store that much energy.

In previous cases, Zhang says, the sugar concentration was too high and this impacted how well the enzymes could do their jobs — not as many electrons were stripped from the sugar molecules.

This time, scientists came up with the right blend of enzymes and fuel.

"The lifetime of the battery depends on the sugar concentration, plus how many electrons are extracted per glucose," Zhang said.

The malodextrin solution is unique in that it can be broken down slowly through the synthetic enzyme pathway "to generate nearly constant power output rather than a peak power over short time," the study authors wrote.

Basically, the system works so well because the catalysts convert all of the energy stored in the sugar molecules into energy that can be harnessed by something like your cellphone.

The new device, which is about the size of a AAA battery, has an energy density that is 10 times higher than both lithium-ion and previous iterations of sugar-powered batteries, according to the paper. The new battery could last at least two times longer than lithium-ions for the same weight.

In addition, where regular batteries have to be thrown away when the lithium gets used up, the sugar fuel cell can be recharged by filling it with more sugar solution. 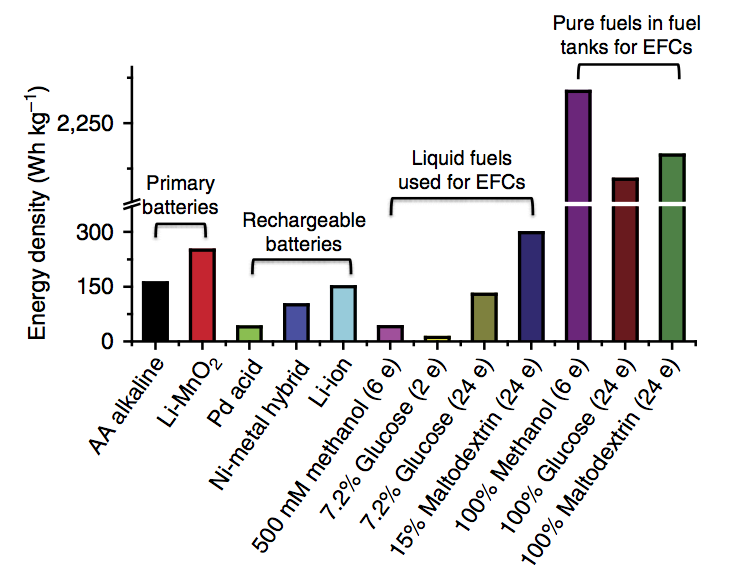 A comparison of energy densities among different types of batteries is shown the chart. The deep purple bar, representing a sugar solution containing 15% malodextrin was tested in the study.

There are still challenges. Although enzymes are plentiful, unlike metal catalysts, they don't last that long (an enzyme in the human body, for instance, only exists for a couple of days before being replaced by the cell). These proteins are also extremely sensitive to temperature — drop a few degrees and they won't work as efficiently.

To be practical in a laptop or a cellphone, the enzymes would need to last for several months or even years. Tweaking the enzymes' structures could make that happen.

Even though the sugar battery stores a high amount of energy for its mass, the maximum amount of power it can put out is still lower than that of lithium-ions, thus limiting its potential applications to portable devices (you couldn't use a sugar battery to run vehicles, for instance).

The team says that the sugar fuel cell c ould be ready to integrate into our electronics in three years and  will eventually be at least one-tenth the cost of lithium-ion batteries.

Cities In The Middle…

Hydro Power Is One…

Solar Power In An…