This is an invention that might change civilization as we know it: A compact fusion reactor developed by Skunk Works, the stealth experimental technology division of Lockheed Martin. It's the size of a jet engine and it can power airplanes, spaceships, and cities. Skunk Works claims it will be operative in 10 years.

Aviation Week had exclusive access to their secret laboratories and talked to Dr. Thomas McGuire, the leader of Skunk Work's Revolutionary Technology division. And revolutionary it is, indeed: Instead of using the same design that everyone else is using—the Soviet-derivedtokamak, a torus in which magnetic fields confine the fusion reaction with a huge energy cost and thus little energy production capabilities—Skunk Works' Compact Fusion Reactor has a radically different approach to anything people have tried before. Here are the two of them for comparison:

Above: The traditional Soviet tokamak design of the International Thermonuclear Experimental Reactor, a gigantic installation being built in France. 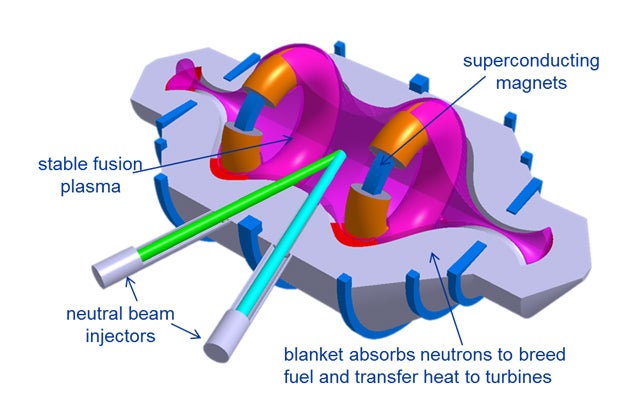 The key to the Skunk Works system is their tube-like design, which allows them to bypass one of the limitations of classic fusion reactor designs, which are very limited in the amount of plasma they can hold, which makes them huge in size—like the gigantic International Thermonuclear Experimental Reactor. According to McGuire:

[The traditional tokamak designes] can only hold so much plasma, and we call that the beta limit. [Their plasma ratio is] 5% or so of the confining pressure. [...] We should be able to go to 100% or beyond.

This architecture allows it to be 10 times smaller at the same power output of something like theITER, which is expected to generate 500 MW in the 2020s. This is crucial for the use of fusion in all kind of applications, not only in giant, expensive power plants.

Skunk Works is convinced that their system—which will be the size of a jet engine—will be able to power everything, from spaceships to airplanes to vessels—and of course scale up to a much larger size. At the size of the ITER, it will be able to produce 10 times more energy, McGuire claims:

It's one of the reasons we think it is feasible for development and future economics. Ten times smaller is the key. But on the physics side, it still has to work, and one of the reasons we think our physics will work is that we've been able to make an inherently stable configuration. In our case, it is always in balance. So if you have less pressure, the plasma will be smaller and will always sit in this magnetic well.

But we all know that the road to the dream of clean, unlimited energy is paved with failed inventions. The situation here seems different. First, Lockheed Martin is not a crazy dude working in a garage. It's one of the world's largest aerospace and military companies.

McGuire knows that they are just starting now, but he claims the design is sound and they will advance quickly until its final implementation in just a decade:

We would like to get to a prototype in five generations. If we can meet our plan of doing a design-build-test generation every year, that will put us at about five years, and we've already shown we can do that in the lab. So it wouldn't be at full power, like a working concept reactor, but basically just showing that all the physics works.

Five years after that, they expect to have a fully operative model ready to go into full-scale production, capable of generating 100MW—enough to power a large cargo ship or a 80,000-home city—and measure 23 x 42 feet, so you "could put it on a semi-trailer, similar to a small gas turbine, put it on a pad, hook it up and can be running in a few weeks."

I really hope this works out.

Andrea Rossi’s E-Cat — the device that purports to use cold fusion to generate massive amounts of cheap, green energy — has been verified by third-party researchers, according to a new 54-page report. The researchers observed a small E-Cat over 32 days, where it produced net energy of