A New Brunswick man says his heating bills are decreasing thanks to a solar furnace that cost him $300 to build.


A Fredericton-area man (New Brunswick Canada) says his heating bills are decreasing thanks to a solar furnace that cost him $300 to build.

Buchanan is an environmental consultant and depends on heat and clean air to raise rainbow trout for his aquatic toxicology studies.

He began looking for heating alternatives after his bills for heat and an air exchanger soared this winter.

Buchanan says his first attempt at solar heating worked a little too well. 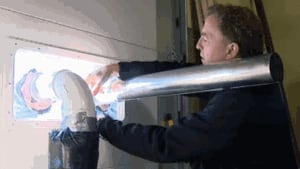 "We took it outside … it was a cloudy day and I was doing paperwork and kind of forgot about it and had the exhaust and intake plugged," he said. "The sun came out and I said, 'I should run out and see if it's producing any heat.'

"Well, on the way over I heard a large bang and the inside window had broken on the thermopane, it got so hot. I took a thermometer and checked it, and it was 120 C, so you could boil water inside here."

Now, with air circulation from a small exhaust fan, Buchanan says his solar furnace — attached to the southern side of the building — works like a charm.

"I think it's something that everyone should have affixed right to [their] house. I think it should be part of your design," said Buchanan. "It would be very easy to do. [With a] south-facing house like mine, it's perfect.

"Just mount it on the side. If you touch the side of the house, even at —20 C, it's still hot. We should be gathering that heat and driving it inside as quickly as possible."

Buchanan says he doesn't yet know how much he is saving by installing the makeshift heating system. He points out the solar heat is coming down for free.

Click Here to go to their page and watch the video:

The Need For Heat,…

This Is One Of The…

Setting Up A Portable…