Earth Tubes are basically tubes or ducts buried in the earth for the purpose of exchanging heat between the air in the tubes and the earth.  They are often referred to as “Earth Air Heat Exchangers” (EAHX) or “Air-Ground Heat Exchangers” (AGHX) or a variety of other names.   In hot climates (such as Australia) they are often called “cool tubes”, but they work just as well for warming cold air.  They are generally used to moderate the temperature of fresh air entering well sealed homes and are a particularly natural fit for Earth Sheltered homes.

Most home owners who install them realize that, while they are dealing with very ancient and intuitive technology, Earth Tubes are still poorly understood and somewhat “experimental”.  There is much doubt about the performance or cost effectiveness of earth tubes, but I suspect that the poor results are often the result of poor design.  While I am unlikely to put all my “eggs” in the Earth Tube basket, I believe they can be an important component of any good passive solar design. 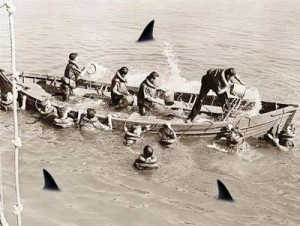 Trying to heat and cool our homes is like bailing out a leaky boat… You can keep bailing or try to plug the holes.

In winter, the fresh air outside is cold.  Our homes are full of small cracks (intentional or unintentional) and that cold air finds its way in.  Of course, we use a variety of mechanical systems to heat that air up to a comfortable temperature.  However, that warmed air escapes again pretty quickly and is replaced by new cold air, which is heated up again.  In summer the process is reversed, with expensive machines extracting the heat from our homes while hot air is pouring back in again thru every crack.  It is like trying to bail out a boat that is full of holes, if we didn’t have machines to take care of the work for us, we would never put up with it.  Infiltration is said to be the single greatest waste of energy in the average home.   (The leakage in the average home is equivalent to leaving a 3?x3? window open all year, it gets even worse when the wind blows.  According to the U.S. Department of Energy, Americans spend 30% of the nations energy adjusting the temperature of the air in their homes.  )

Many PassivHaus builders spend a fortune trying to keep this outside air out, while the earth covered portions of earth shelters are naturally airtight.  Either way, for a healthy home, we still need to let some fresh air in.  However, homes need fresh air  to be healthy.  If you bring that air directly in from the outdoors, you will need to heat it up to room temperature.  The goal is fresh air exchange without giving up the weather tight advantage completely (and just drilling a big open hole in the wall).   One possible solution is an Air to Air Heat Exchanger  (or Heat Recovery Ventilation (HRV)) that attempts to retain heat by transferring it from the outgoing air to the incoming air.  These units can also filter air and usually include a blower and other active components.  They easily cost several thousand dollars. 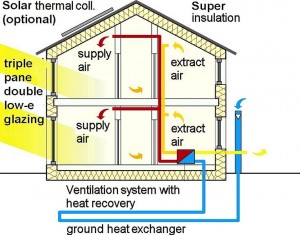 The earth tubes are just a lower tech, passive way to do something very similar.  They tap into the heat storage capacity of the earth to moderate incoming air all year long.  They can be used with above ground homes, but are a particularly natural fit for an earth sheltered home.

Basically, in an earth sheltered home with an intake earth tube, the cold winter air is drawn into the tube by convection or fans and absorbs heat from the earth on its way.  By the time it enters the home, its temperature is significantly moderated by the earths temperature, but it usually still needs some additional heat.  This additional energy could come from fossil fuels, a wood stove or passive solar.  Of course, less additional energy would be required than if the air were drawn in directly from the outside.   After being used in the home, the air is eventually expelled (again either due to convection or assisted with fans) thru an exit earth tube where its energy is absorbed back into the earth…

If the exit pipe runs near the entrance pipe (as shown in the above image), exit heat can actually be transferred to the incoming air (similar concept to an HRV).  This is known as a “Camels Nose” heat exchanger.  Other layouts include the use of Bernoulli’s principle and/or a solar chimney to draw the air thru the tubes and home and out the roof.

A variety of concerns are often stated as reasons not to use Earth tubes.  These range from discussions about cost/benefit analysis to serious health concerns related to mold or radon.  In general, these are due to experiences with improperly installed earth tubes.  This section of this page grew too large and was broken out to a separate page on Earth Tube Concerns.

While the majority of users only use earth tubes for moderating fresh air, these simple “air to ground heat exchangers” can be used in other ways.  I would like to use Earth Tubes for 3 main purposes.

1) Fresh air moderation; these basic earth tubes bring fresh air into the home (ventilation) and allow stale air to leave.  Passing thru the earth moderates the temperature of the air and reduces the load on the heating or cooling systems.  I created a separate page to discuss ventilation requirements here.

2) By-passive Solar; these earth tubes never enter the home.  Instead they form a loop between the