Homes built with bottles and sand 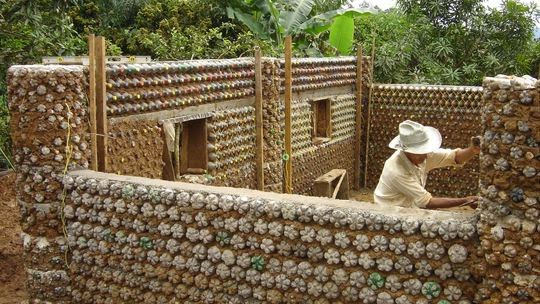 WHEN Ali Rajab and Ms Tima Said, members of the Tanga-based Best Camp Group, an Out of School Youth Group formed in 2011 were asked to construct an internet café using bottles they could not believe this could be true. "We were excited.

A house made of bottles? We never believed this could be true, but we were anxious to participate and see if this is possible.

We have seen pictures of houses made constructed using bottles instead of bricks, but we were anxious to see them in real life," said Ali.

It was a day full of excitement when Ali and Tima stopped in front of a crowd of enthusiastic onlookers to read their brief message before the house was officially opened.

"We finally believed that waste bottles can be turned into houses and I now have the ability to advise anybody who wants to build such a house because I have taken part, physically, in building it," Ali said.

Tima, one of the founders of the group, says that everything seemed to like a fairy tale you read from fairy tale books or cartoon video programmes, but she is now happy to have become one of the people who built the first bottle house in Tanzania.

Plastic water bottles have been accepted as the magic answer to avoiding unsafe water, especially for travellers, and a variety of gatherings.

Bottles are now a common sight, but fast becoming an eyesore and a menace to the environment. It is sad that even efforts to collect them for recycling seem to be a drop in the ocean.

Why did Tanga International Competence Centre (TICC) think of constructing a house using water bottles? According to the TICC Director, Ruth Nesje it was a contribution to the efforts to finding a lasting solution to challenge of how to dispose plastic bottles. 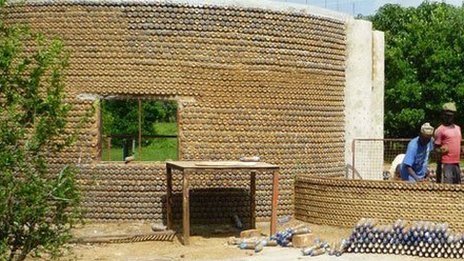 'We were looking for ways to dispose of the ever increasing load of plastic water bottles used by our guests and there came the idea- of collecting them to construct a small house that would be used as an internet café by out of school youths," Ms Nesje said at the inauguration of the bottle house.

The project, which was also executed as part of the activities of out of school youth activities involving a group established under centre's tutelage, Best Camp, has shown that there are more ways to dispose of the ever increasing load of used bottles which are now being collected for recycling.

The problem of empty water bottles being thrown away and littering many parts of Tanzania is boggling the minds of many people, not here in Tanzania only but the whole world. Every day, tons of plastic waste in the form of water bottles are dumped on roadside drains or burned in landfill sites or on vacant land.

The impact of plastic waste on communities and the environment is significant and far-reaching. Travelling in any highway in Tanzania, the worst eyesore one would see is plastic bottles, although the bottles have also found a variety of uses by locals such as packaging homemade juice, local brew and local medicine.

"Not all of them can be collected and find their way to recycling factories. Many of them remain to become an eyesore in some cases with no other ways of disposing them," said Ferdinand Martin, who deals with Out of School Youth programmes at the centre.

Plastic waste clogging drains and waterways which is now common, can lead to flooding and the pooling of stagnant water, which reduces water quality and provides a breeding ground for malaria carrying mosquitoes. In addition, the burning of plastic waste at dump sites occurs at a low temperature, which releases plumes of toxic smoke and creates hazardous ash that contaminates the surrounding soil. The problem of plastic water bottles is not confined to Tanzanian.

According to the "National Geographic," Americans drink more bottled water than any other nation, purchasing an impressive 29 billion bottles every year. "Making all the plastic for those bottles uses 17 million barrels of crude oil annually.

That is equivalent to the fuel needed to keep 1 million vehicles on the road for 12 months," the paper wrote. The recycling rate for those 29 billion bottles of water is low, according to the National Geographic and only about 13 per cent end up in the recycling stream where they are turned into products like fleece clothing, carpeting, decking, playground equipment and new containers and bottles.