To a great extent nineteenth-century urban life moved at the pace of horse-drawn transportation, and the evidence of the horse was everywhere—in the piles of manure that littered the streets attracting swarms of flies and creating stench, in the iron rings and hitching posts sunk into the pavements for fastening horses’ reins, and in the numerous livery stables that gave off a mingled smell of horse urine and manure, harness oil and hay. In 1880 New York and Brooklyn were served by 427 blacksmith shops, 249 carriage and wagon enterprises, 262 wheelwright shops, and 290 establishments dealing in saddles and harnesses. They were eminently necessary. On a typical day in 1885 an engineer, Francis V. Greene, making a study of urban traffic conditions, counted 7,811 horse-drawn vehicles, many with teams of two or more horses, passing the busy corner of Broadway and Pine Street. 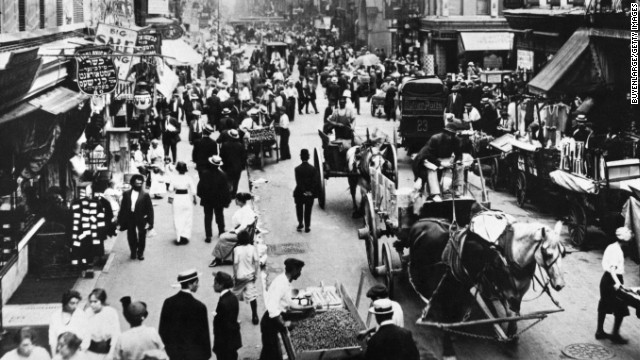 While some of these conveyances were fine carriages drawn by spirited teams, the most common city horses were commercial or work animals. City streets were crowded with large team-pulled drays guided by husky and colorfully profane drivers and piled high with heavy freight. Among these, single-horse spring wagons twisted their way, making deliveries of ice, milk, and goods of every kind to residential areas. Their sides were often brightly decorated with advertisements, catching the eyes of passers-by and of the riders in the many omnibuses and hacks plying their routes. The horse remained essential in urban civilization, even after the development of the steam engine. As the Nation noted in 1872, though great improvements had been made in the development of such “agents of progress” as the railroad, the steamboat, and the telegraph, modern society’s dependence on the horse had “grown almost pari passu with our dependence on steam.” For it was the horse who fed the railroads and steamboats with passengers and freight, and who provided transportation within the cities.

Yet this hard-working animal, so vital to the functioning of urban society, posed problems that were recognized by even the earliest American city dwellers. The question of clean streets was most obvious. In eighteenth-century Boston and New York, money was allocated by the city fathers for street cleaning, and householders were required to sweep the road in front of their doorways. Cities made sporadic attempts during the mid-nineteenth century to mechanize the tasks of sanitation. In 1855 New York introduced street-sweeping machines and self-loading carts, and in 1865 urban entrepreneurs formed the New York Sanitary and Chemical Compost Manufacturing Company for the purpose of “cleansing cities, towns, and villages in the United States” with several varieties of mechanical devices adapted to the task.  By 1880 almost all cities over thirty thousand in population employed street-cleaners.

American cities made their most sustained efforts to clean the streets under the stimulus of the fear induced by epidemics of cholera, smallpox, yellow fever, or typhoid. Many eighteenth- and nineteenth-century medical authorities believed that such diseases were caused by “a combination of certain atmospheric conditions and putrefying filth,” among which horse manure was a chief offender.    In 1752 Boston selectmen allocated extra funds to clean the streets because of the fear that street dirt might contain smallpox infection, and in 1795, during the yellow-fever season, town officials invited neighboring farmers to collect the manure from the streets free of charge. The city fathers of New York, faced by the threat of cholera in 1832, made special efforts to cleanse the cobblestones, thereby divesting the city "of that foul ailment on which pestilence delights to feed."

But unless jolted by rampant disease, city authorities and citizens tolerated a great deal of “that foul aliment” in their streets. One reason, perhaps, was a reluctance to spend money on such an unsatisfying, if crucial, municipal effort. Some cities tried to cover the cost of street cleaning by selling the manure for fertilizer. In 1803 the New York superintendent of scavengers expended about twenty-six thousand dollars for street cleaning and realized over twenty-nine thousand dollars from the sale of the manure collected. Despite this instance of profitable purifying, however, paid scavenging did not generally achieve great results. In those cases where private contractors were responsible for cleaning the streets, citizens often complained that they neglected other forms of rubbish and only collected the salable manure. Nor did a shift to public sanitation service improve things.  Officials of post-Civil War years often reported that street dirt was becoming too mixed with other forms of litter to be sold as fertilizer.  Moreover, whatever salable quality of the street refuse,  urban sanitation departments during the nineteenth century were notoriously inefficient. Vexed by graft and corruption, they were staffed by “old and indigent men,” “prisoners who don’t like to work,” and “persons on relief.”


Street cleaning, therefore, remained largely inadequate, and one is thus not surprised to discover that newspapers, diaries, and governmental reports abound with complaints about the problems created in the city by horse manure left in the public thoroughfares. Manure collected into unattended piles by the street cleaners bred huge numbers of flies and created “pestilential vapours.” Offal was sometimes carried from wealthy residential neighborhoods and dumped in poor neighborhoods, where it was left to rot. Streets turned into virtual cesspools when it rained, and long-skirted ladies suffered the  indignity of trailing their hems in liquefied manure. In London, ladies and gentlemen were aided in their navigation through a sea of horse droppings by “crossing-sweepers,” but no such group appeared in more democratic American cities. Yet dry weather was no great improvement, for then there were complaints of the “pulverized horse dung” that blew into people’s faces and the windows of their homes, and over the outdoor displays of merchants’ wares. The coming of paved streets accelerated  this problem, as wheels and hoofs ground the sun-dried manure against the hard surfaces and amplified the amount of dust.