The Strange & Curious Tale of the Last True Hermit

For nearly thirty years, a phantom haunted the woods of Central Maine. Unseen and unknown, he lived in secret, creeping into homes in the dead of night and surviving on what he could steal. To the spooked locals, he became a legend—or maybe a myth. They wondered how he could possibly be real. Until one day last year, the hermit came out of the forest 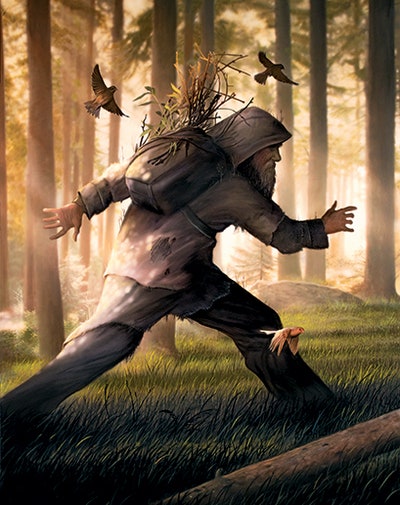 The hermit set out of camp at midnight, carrying his backpack and his bag of break-in tools, and threaded through the forest, rock to root to rock, every step memorized. Not a boot print left behind. It was cold and nearly moonless, a fine night for a raid, so he hiked about an hour to the Pine Tree summer camp, a few dozen cabins spread along the shoreline of North Pond in central Maine. With an expert twist of a screwdriver, he popped open a door of the dining hall and slipped inside, scanning the pantry shelves with his penlight.

Candy! Always good. Ten rolls of Smarties, stuffed in a pocket. Then, into his backpack, a bag of marshmallows, two tubs of ground coffee, some Humpty Dumpty potato chips. Burgers and bacon were in the locked freezer. On a previous raid at Pine Tree, he'd stolen a key to the walk-in, and now he used it to open the stainless-steel door. The key was attached to a plastic four-leaf-clover key chain, with one of the leaves partially broken off. A three-and-a-half-leaf clover.

He could've used a little more luck. Newly installed in the Pine Tree kitchen, hidden behind the ice machine, was a military-grade motion detector. The device remained silent in the kitchen but sounded an alarm in the home of Sergeant Terry Hughes, a game warden who'd become obsessed with catching the thief. Hughes lived a mile away. He raced to the camp in his pickup truck and sprinted to the rear of the dining hall. He peeked in a window.

And there he was. Probably. The person stealing food appeared entirely too clean, his face freshly shaved. He wore eyeglasses and a wool ski hat. Was this really the North Pond Hermit, a man who'd tormented the surrounding community for years—decades—yet the police still hadn't learned his name?

Hughes used his cell phone, quietly, and asked the Maine State Police to alert trooper Diane Perkins-Vance, who had also been hunting the hermit. Before Perkins-Vance could get there, the burglar, his backpack full, started toward the exit. If the man stepped into the forest, Hughes understood, he might never be found again.

The burglar eased out of the dining hall, and Hughes used his left hand to blind the man with his flashlight; with his right he aimed his .357 square on his nose. "Get on the ground!" he bellowed.

The thief complied, no resistance, and lay facedown, candy spilling out of his pockets. It was one thirty in the morning on April 4, 2013. Perkins-Vance soon arrived, and the burglar was placed, handcuffed, in a plastic chair. The officers asked his name. He refused to answer. His skin was strangely pale; his glasses, with chunky plastic frames, were extremely outdated. But he wore a nice Columbia jacket, new Lands' End blue jeans, and sturdy boots. The officers searched him, and no identification was located.

Hughes left the suspect alone with Perkins-Vance. She removed his handcuffs and gave him a bottle of water. And he started to speak. A little. When Perkins-Vance asked why he didn't want to answer any questions, he said he was ashamed. He spoke haltingly, uncertainly; the connection between his mind and his mouth seemed to have atrophied from disuse. But over the next couple of hours, he gradually opened up.

His name, he revealed, was Christopher Thomas Knight. Born on December 7, 1965. He said he had no address, no vehicle, did not file a tax return, and did not receive mail. He said he lived in the woods.

"For how long?" wondered Perkins-Vance. 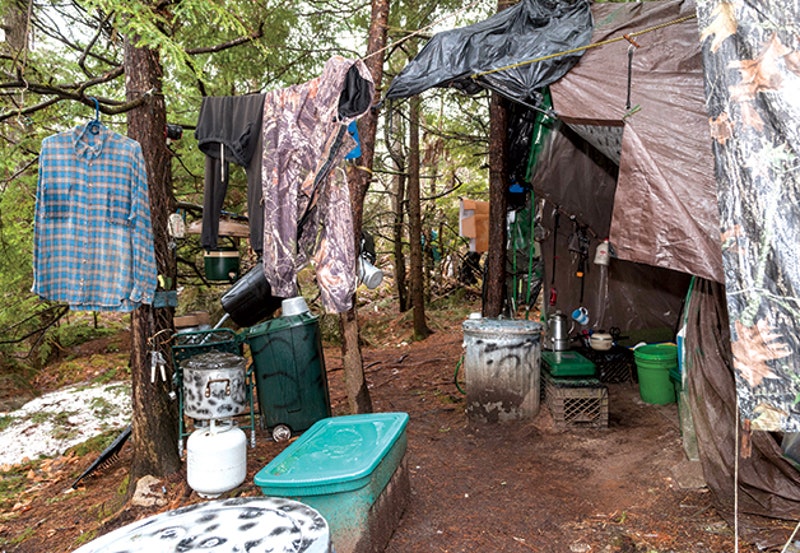 Knight thought for a bit, then asked when the Chernobyl nuclear-plant disaster occurred. He had long ago lost the habit of marking time in months or years; this was just a news event he happened to remember. The nuclear meltdown took place in 1986, the same year, Knight said, he went to live in the woods. He was 20 years old at the time, not long out of high school. He was now 47, a middle-aged man.

Knight stated that over all those years he slept only in a tent. He never lit a fire, for fear that smoke would give his camp away. He moved strictly at night. He said he didn't know if his parents were alive or dead. He'd not made one phone call or driven in a car or spent any money. He had never in his life sent an e-mail or even seen the Internet.

He confessed that he'd committed approximately forty robberies a year while in the woods—a total of more than a thousand break-ins. But never when anyone was home. He said he stole only food and kitchenware and propane tanks and reading material and a few other items. Knight admitted that everything he possessed in the world, he'd stolen, including the clothes he was wearing, right down to his underwear. The only exception was his eyeglasses.

Perkins-Vance called dispatch and learned that Knight had no criminal record. He said he grew up in a nearby community, and his senior picture was soon located in the 1984 Lawrence High School yearbook. He was wearing the same eyeglasses.

For close to three decades, Knight said, he had not seen a doctor or taken any medicine. He mentioned that he had never once been sick. You had to have contact with other humans, he claimed, in order to get sick.

When, said Perkins-Vance, was the last time he'd had contact with another person?

Sometime in the 1990s, answered Knight, he passed a hiker while walking in the woods.

"What did you say?" asked Perkins-Vance.

"I said, 'Hi,' " Knight replied. Other than that single syllable, he insisted, he had not spoken with or touched another human being, until this night, for twenty-seven years.

Christopher Knight was arrested, charged with burglary and theft, and transported to the Kennebec County jail in Augusta, the state capital. For the first time in nearly 10,000 days, he slept indoors.

News of the capture stunned the citizens of North Pond. For decades, they'd felt haunted by…something. It was hard to say what. At first, in the late 1980s, there were strange occurrences. Flashlights were missing their batteries. Steaks disappeared from the fridge. New propane tanks on the grill had been replaced by old ones. "My grandkids thought I was losing my mind," said David Proulx, whose vacation cabin was broken into at least fifty times.

Then people began noticing other things. Wood shavings near window locks; scratches on doorframes. Was it a neighbor? A gang of teenagers? The robberies continued—boat batteries, frying pans, winter jackets. Fear took hold. "We always felt like he was watching us," one resident said. The police were called, repeatedly, but were unable to help.

Locks were changed, alarm systems installed. Nothing seemed to stop him. Or her. Or them. No one knew. A few desperate residents even left notes on their doors: "Please don't break in. Tell me what you need and I'll leave it out for you." There was never a reply.

Incidents mounted, and the phantom morphed into legend. Eventually he was given a name: the North Pond Hermit. At a homeowners' meeting in 2002, the hundred people present were asked who had suffered break-ins. Seventy-five raised their hands. Campfire hermit stories were swapped. One kid recalled that when he was 10 years old, all his Halloween candy was stolen. That kid is now 34.

Still the robberies persisted. The crimes, after so long, felt almost supernatural. "The legend of the hermit lived on for years and years," said Pete Cogswell, whose jeans and belt were worn by the hermit when he was caught. "Did I believe it? No. Who really could?"

Knight's arrest, rather than eliminating disbelief, only enhanced it. The truth was stranger than the myth. One man had actually lived in the woods of Maine for twenty-seven years, in an unheated nylon tent. Winters in Maine are long and intensely cold: a wet, windy cold, the worst kind of cold. A week of winter camping is an impressive achievement. An entire season is practically unheard of.

Though hermits have been documented for thousands of years, Knight's feat appears to exist in a category of its own. He engaged in zero communication with the outside world. He never snapped a photo. He did not keep a journal. His camp was undisclosed to everyone.

There may have been others like Knight, whose commitment to isolation was absolute—he planned to live his entire life in secret—but if so, they were never found. Capturing Knight was the human equivalent of netting a giant squid. He was an uncontacted tribe of one.

Reporters across Maine, and soon enough across the nation and the world, attempted to contact him. What did he wish to tell us? What secrets had he uncovered? How had he survived? He stayed resolutely silent. Even after his arrest, the North Pond Hermit remained a complete mystery.