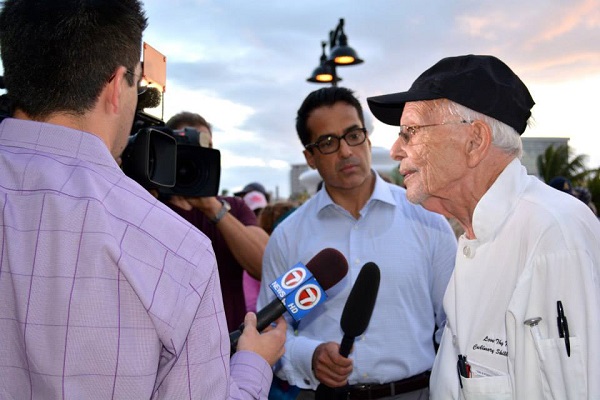 In a follow up to the story we shared the other day, 90 year old Arnold Abbott has been arrested twice in less than a week for trying to provide meals to those in need. His most recent arrest came on Wednesday when he and supporters gathered at Fort Lauderdale Beach to feed the homeless.

“I would like to thank you all for your continued support, kind comments, and heartfelt thoughts,” Abbott wrote on his Facebook page. “Tonight I post with a grateful heart because we were allowed to feed our people on Fort Lauderdale Beach, although I was eventually pulled away by a slew of officers to be given a citation yet again.”

The brouhaha over Abbott’s determination to feed the hungry erupted Sunday when Abbott and two local pastors were arrested for feeding people in Fort Lauderdale’s Stranahan Park. Abbott is the founder of Love Thy Neighbor, a local nonprofit that helps the homeless. He’d only handed out a few of the 300 meals he had prepared when police told him to stop or else.

Abbott, who battled the city’s ban on feeding homeless on the beach back in 1999 and won, wrote on his Facebook page that an officer told him to “’Drop that plate immediately.’ As though it were a weapon.”

Fort Lauderdale passed a new law Oct. 22 that bans public food sharing, which was said to have been passed "in the middle of the night."

Despite his initial arrest, Abbott promised supporters via Facebook that he’d be on the beach Wednesday to feed the homeless. That’s when the second arrest took place.

That law, Abbott has stated, is one he intends to fight.

“I’m going to have to go to court again to sue the city of Fort Lauderdale, the beautiful city,” Click Orlando quoted him as saying after Sunday’s arrest.

Right now, however, Abbott is asking supporters to let the city of Fort Lauderdale know where they stand on the new law.

“We at Love Thy Neighbor would like to urge you all to please continue to send emails, and make phone calls to the Mayor of Fort Lauderdale Mr. Jack Seiler,” he wrote on Facebook. “He can be reached at 954-828-5003 or via e-mail at jack.seiler@fortlauderdale.gov "

This is a great opportunity to highlight the difficulties that cities face in dealing with homelessness and finding good solutions.  They're going to end up somewhere, and Florida happens to be a state where it never gets cold.  If there was ever an opportunity to spearhead a good solution, now is the time.  Current media attention could spread such an idea around the world.  What are your ideas of how to help this situation?